United by the Instagram account The Instaplushies, the Instagram plushie community counts roughly 20,000 accounts worldwide. Every day, thousands of stuffed animals use the platform to share their adventures with the world. Some travel the globe, others help their humans in the house, or serve as mascots for human programs or events, such as the space programme. But who are the most celebrated, most popular plushies out there? Which plushie accounts should you follow? We’ve constructed a small list, arranged by the amount of followers the accounts have.

Though not officially a plushie, the little guy is one of Instagram’s most avid toy travelers.

Martin keeps a pilot as a pet, which allows him to see the world from above more than any other teddy bear!

Self-described as “cute, but naughty”, this relaxed Russian pig resides in Moscow.

So proud to be able to put Fluffy himself on this list! Fluffy has allowed us to travel with him for quite a few years, which earned him the following description: “a small leopard in a big world: from undiscovered Europe to the volcanic valleys of Sumatra, Fluffy has been travelling around the world for over a decade.”

Private is a true sushi connoisseur who would travel the whole world just to get his fins on some delicious salmon nigiri.

Chip’s fame extends beyond Instagram: he’s the star of the books Chip to the Rescue and Chip Goes to Art School.

Unicorn Horst lives in Bremen with his mother Steffi. His German heritage makes him a descendant of the original teddy bear.

Once this little fox sets out on an adventure, all his friends follow! Au happily shares his daily life with his followers, giving us some insight into what keeps a fox plushie occupied.

This little cat has been travelling around the world for over 30 years, making her a senior citizen in the world of travel plushies.

This British critter loves the outdoors and frequently sits down to watch a good film.

Hope, the ambassador of Honey Grove, is the creator of the popular tag #honeygroveteapartytuesday.

Two hamsters, three hamsters, four, five, six hamsters! Flinki, Flora and family share their many adventures in Germany and beyond.

What do you think, is anyone missing from this list? Let us know! 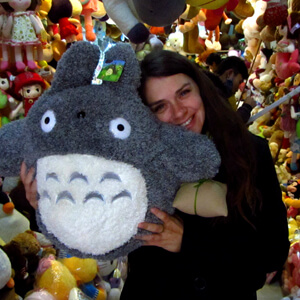 Traveler Rebeka Rotter lived in all corners of the globe. She worked in Hungary, the United States, the United Kingdom and Thailand and volunteered in Ghana and Georgia. Transylvanian blood runs through her veins, which she keeps in check through daily meditation and a host of creative pleasure projects. When not on the road, Beki thrives for being a compassionate psychologist.