Some plushies get to dine in luxurious resorts, while others get to travel to Bali and beyond… but some stuffed animals really take home the price: they get to travel to outer space! Find out everything there is to know about these awesome space cadets and read about some of the most famous plushie astronauts…

Why do astronauts take stuffed animals into outer space?

The tradition of carrying stuffed animals into outer space is as old as space travel itself: even cosmonaut Yuri Gagarain, the first man to travel in outer space, was accompanied by a tiny doll on the Vostok 1 spaceship. Since then it has become a small tradition for astronauts and cosmonauts to take plushies on as passengers on their spaceships and have them accompany them on their journey into outer space.

The stuffed animals are not just there because of their cuddly nature: they have an actual job aboard the ship! The stuffed animals serve as so-called “zero-gravity indicators”: they signal the astronauts that they have escaped the pull of Earth’s gravity, by happily floating around the cabin.

In February 1995, Magellan T. Bear became the first teddy bear in outer space. Magellan was the designated “education specialist” of the Space Shuttle Discovery during the STS-63 mission. The little blue bear’s adventure in the great beyond was part of an educational project to stimulate interest in geography, science, and social studies. The bear’s journey had been arranged by the students and faculty of the Elk Creek Elementary School in Pine, Colorado. Magellan was an avid traveler, as he also visited the South Pole, attended U.S. Space Camp and flew on United Airlines’ first Boeing 777 flight. Magellan now resides in the Moving Beyond Earth exhibition at the National Air and Space Museum in Washington, DC.

Magellan was succeeded by Smokey Bear of the Soyuz TMA-04M in 2012. Smokey joined his human Joe Acaba on his second flight to the International Space Station. Smokey is a famous icon in the United States, reminding forest recreationists of the dangers of human-caused forest fires. Though the spaceship was of Russian origin, Smokey was welcomed by all crew members.

To Infinity and Beyond: Celebrities in Space

In 2008, Pixar’s famous animated astronaut Buzz Lightyear flew to the International Space Station on the Space Shuttle Discovery STS-124. He was the first known Disney/Pixar character in outer space. In 2014, snowman Olaf from the Frozen franchise followed him “to infinity and beyond” on the Soyuz TMA-15M crew. Another celebrity plushie that made it into space was Red, the red bird from the Angry Bird video game series. Red boarded the Soyuz TMA-22 spacecraft in 2011.

The first plushie owl to be blasted into space was the little cosmonaut owl who accompanied Alexei Ovchinin on his trip to the International Space Station. The tiny space explorer was a great indicator for when the Russian cosmonauts had reached the right “owltitude”.

Perhaps one of the most out-of-this-world plushie experiences in outer space was when SpaceX’s celestial Earth plushie Buddy looked at itself from above. Buddy was chosen by Elon Musk to single-handedly man SpaceX’s first commercial spaceship the Crew Dragon Demo-1 in 2019. Buddy successfully docked his ship at the International Space Station, were he was received by the station’s astronauts. The Earth plushie became an instant hit after his launch into space, causing Celestial Buddies’ Earth stuffies to rapidly sell out. In May 2020, SpaceX launched their first fully manned spacecraft, which will retrieve Buddy from his outer space holiday.

SpaceX: the Dinosaur on the Crew Dragon

SpaceX Crew Dragon spaceship launched into orbit in May 2020, manned by astronauts Bob Behnken and Doug Hurley. During their flight they were accompanied by Tremor, a sparkly plushie apatosaurus, who was eager to meet up with Earth plushie Buddy, and soon rose to plushie stardom himself. The astronauts had taken the third passenger with them as a little tribute to both their sons, who are avid dinosaur lovers. The dinosaur, a plushie of Beanie Boo lineage, was neither the first plushie in outer space, nor was he the first dinosaur, but he was certainly the most sparkly one! 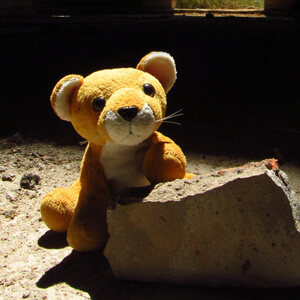 Fluffy first strapped on his bite-sized backpack in 2010, and the tiny traveler has been exploring the remote corners of the world ever since. Fluffy is the author of the story book “Fluffy’s Adventures: Southeast Asia & the Pacific” and frequently writes about his life on the open road.